So you say you’re a creative type who has always wanted to put together some kind of artistic endeavour that will enthral the masses and make you big bucks at the same time?  Well, that’s really quite wonderful, but I’m sorry, you’re reading the wrong article.  No, this is for somebody who is desperate to provide a bit of entertainment to anyone who may listen, and to create that entertainment on an absolutely near-invisible shoestring budget.

Actually, this is more of a story about how I did it, and there are some steps here that I don’t recommend for everybody, but you should still know everything.  Well, almost everything.  I won’t bore you with all the sleepless nights I spent weeping over it like it was my own child.  Oh.  Looks like I just did.  So, why not read on?

1. COME UP WITH A WONDERFUL IDEA.

Audio dramas are stories that are told so well that the listener can see it like a movie in his mind.  It’s your job to come up with that story.  You can do what I did, which is create an anthology series called Pulp-Pourri Theatre (each episode a standalone story with a beginning, middle and end), or you can go the way of a serial and have several episodes with a longer, drawn-out story.  The choice is yours, and you should go ahead and write the outline for your series.  No, go ahead.  I’ll wait right here until you’re done.  Got any magazines?

2. WRITE YOUR SCRIPTS IN WHATEVER FORMAT WORKS FOR YOU.

Oh, hi!  Done with your outline already?  Excellent!  Now it’s time to write your scripts.  As far as format is concerned, there is no right or wrong way to do your scripts.  If your actors can deliver the lines, if you can use the script as a guide to production afterward (cues for editing, mixing music and sound effects, etc.), then the specific format doesn’t matter.

[Editor’s note:  The BBC have released a free audio drama formatting guide, if you happen to be like audio drama tutor Jay and so damn quintessentially British you can’t stray from the mother network.]

I like a very simple approach:  I type everything out in Microsoft Word.  I have my margins set at two inches in on either side so my actors have a shorter path for their eyes to follow while reading their lines.  Some producers like to number their lines so all they have to do is say, “Go to line 57”.  I don’t do this because it looks like extra work, and I already have enough work to do in other areas.  The main thing is, write it.  Them.  Write them.  Don’t do anything else until you have your full season of scripts ready.  Loo breaks are OK, and an occasional snack, but that’s it.

Oh, and make your scripts whatever length you want. No need to stick to the standard TV or radio format of 30 minutes.

Your audio drama is effectively a podcast, and all you need for a podcast is a USB microphone, a laptop, editing software and a quiet place to record.  Steer clear of high-end microphones, unless you have money to throw away (and in which case, again, you’re reading the wrong article).  Very good USB mics can be had for less than $100.  I won’t recommend a specific brand, but I will recommend a type:  Go with a cardioid-pattern microphone, which will eliminate a lot of room noise and pick up only what’s in front of it (your actors).

Record all of your actors using the same microphone in the same environment so you’ll get the same quality of sound for each one.  This is important if you’re recording the voices at different times, which is what tends to happen to me more often than not.  Audacity is free-download audio editing software that, I am told, is very easy to use.  I cut my teeth on Cool Edit Pro (which is now known as Adobe Audition) and already had it installed on my computer (and didn’t want to learn a new software), so I can’t say for sure exactly how simple Audacity is.  Again, free is better than spending money if you’re on a tight budget, so go with free if you can. 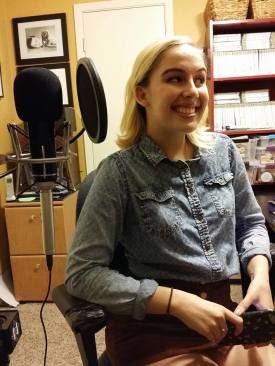 Did you think I’d forget this bit?  You may be fortunate to live in a city that has its own community theater, and you may be part of this group already.  If so, you are in luck, because nobody will be better to help you get started than a big group of people who act for free!  Your greatest allies will be the otherwise versatile actors who can never get roles because they don’t “look the part”, since they will be starving for any role you are willing to give them.  I am not being disparaging in the slightest, because I happen to fall into this category, i.e., “the face made for radio”.  Voice work is a dream situation, because the audience creates what you look like in their collective mind.

If you are not in a city with a community theater, or if you don’t have a bunch of pals willing to help you in exchange for beer, your work will be more difficult because you’ll have to find actors from elsewhere.  Facebook has made this moderately easy with special groups devoted to audio drama auditions, but it’s still not as good as directing an actor yourself.  You may be forced to ask for re-do’s and you may have to record a line yourself and send it to the actor if he or she isn’t giving you what you want.  The on-line audition process may not always be successful, either:  You may not get enough actors, or you may not get the acting quality you desire, so your search may take more time.

Assuming you do have a local cast:  It costs nothing to be kind to your actors; remember they are volunteers.  If an actor is a few minutes late, or needs to reschedule, do your best to be understanding and patient.  If an actor isn’t meeting your expectations on the first couple of tries, keep working with them.  Speak the line as you want to hear it, and then ask them to repeat it.  Most of them will have never done voice acting before, and they want this new experience you are giving them, or they wouldn’t be there.  Be patient with one and you’ll find it easier to be patient with all.  You’ll earn a good reputation and more actors will want to work with you.  However, if you find yourself in an empty room on a day when actors were scheduled, it means maybe your rep ain’t so good.

Encourage your actors to study their lines in advance to become familiar with the sentence structure.  Then read the lines together before recording.  (I am of the school of thought that believes the playwright wrote the lines a certain way for a reason, so I do not allow ad-libbing or altering the lines, even down to the difference between a “these” and a “those”.  You do not have to be, but you should still maintain control during the session.)

Have them take notes.  They can hold the scripts but not turn pages during another actor’s lines.  The microphone picks up EVERYTHING.  For example:  I was suffering through a pretty bad head cold recently and while I was listening to a track I could hear my own labored breathing now and again in the background.  Not good!

6. BE METICULOUS WITH YOUR EDITING.

I cannot stress this enough.  BE METICULOUS.  The final dialogue track should be as clean as possible, free of clicks and pops and hiss (and your own breathing, see above).  Keep pauses between the lines to a minimum, unless you’ve written in a “pregnant pause” – but even then, keep that shorter than usual.  Maintain the flow of dialogue.  Do your best to edit during recording.  By this I mean, be listening for stray noises, like page turns and chair squeaks, and if you’re like me, cars driving down your street.  All recording must pause when a car drives down my street, and I just hold up my hand to stop the dialogue as soon as I hear it.

If somebody makes a noise over dialogue and you don’t catch it and have the actor re-do the line, it’ll be there forever and you can’t remove it, and it’ll spoil the entire show for you.  Trust me.  Nobody else may ever notice it, BUT YOU WILL KNOW IT’S THERE.  Like a gigantic blemish on the end of one’s nose.  You’re not using expensive recording tape, you’re using digital audio, so you can afford to pause now, re-do the line, and then cut out the bad noise in post-production.  Hint:  Be sure to save the good stuff for an eventual blooper reel.

7. GET MUSIC AND SFX FROM THE PUBLIC DOMAIN.

Believe it or not, classical music makes gorgeous background music for audio dramas.  Basically, anything in the U.S. written or composed prior to 1922 has passed into the public domain, which means a lucky audio drama producer can snag it and use it for free.  You can also buy CDs from eBay that have lots of SFX.  Websites exist that offer sound effects and music that are available to use for free if you credit the creator.

8. DON’T LAUNCH THE PROGRAM UNTIL YOU ARE 100% SATISFIED.

I have a ritual:  First, I edit all the dialogue so all voices are together in the right order.  Then I listen to the voice track(s) several times, trying to catch mistakes.  After I’m satisfied, I add music and sound effects, then listen again several times, to make sure everything’s flowing well.  Only when I am satisfied that no further action could be taken to improve the program do I upload it to my website for public consumption.  (WARNING: You may still have a “why-didn’t-I-think-of-that-before?” moment, and find errors months after launching that you didn’t catch earlier.  I recommend you fix them and re-launch without mentioning it.  I have been doing this since the beginning, and once while well into Season Two fixed a long-annoying passage in a Season One episode.  In the words of George Orwell, “He Who Controls the Past, Controls the Future”.)

That’s it, really.  You’re up for a lot of hard work that you’ll be forced to do alone, there will be hours and hours spent recording and editing and mixing, and if you’re like me, you don’t want anybody else to do it because nobody else has your vision of how it should be.  If you’re not like me (i.e. smart), you’ll find others to share the load and make it a true collaboration.  Either way, the final product is the important thing.  Now, go out there and create audio drama!

For more on the journey of Pete Lutz, check out Pete Lutz: The Pulp Chaser.