A few times a semester (fancy talk for “a third of a year”), our radio classes at the University of Sunderland feature guest lecturers, usually people who are active in the creative industries.  Our last:  Mike Duddy, who recently shared a boom-handling session with our students.

But last week’s session excited me a lot.  And I mean a lot.

Mike Pinchin designs video games.  I remember a lecture with him back when I was a student, from 2010.  He’d recreated the university campus, and had Daleks patrolling the media building.  Since then, he’s been making money from releasing his own games on mobile platforms.  He designs the characters, the aesthetics, the sound…  And he joined our class to show us just how important sound is to enhance the immersive experience.  “There are people doing all kinds of awesome sound design in video games – whether they’re actual video games or interactive experiences.” 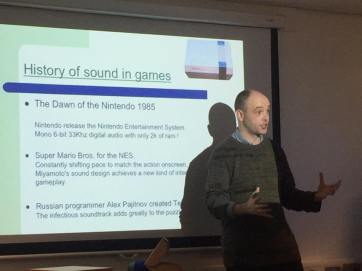 Sound has long been a central part of video game experiences, and it’s really interesting to see it used effectively.  “Even right back to Space Invaders, when you couldn’t manipulate much more than make beeps,” Mike explains.  It’s an old classic; the aliens move across the screen, back and forth, making this beeping sound as they do, and gradually work their way down the screen.  And you’ve got to laser them all, before they get to you.  And as they get closer and closer, they speed up; but so too does the sound.  “And that really gets your adrenaline going, really gives you that sense of tension.”

But, “If you’re working in sound recording, you need to be versatile.”  For instance, he brought up Chris Watson, a sound recordist who specialises in national history sounds.  If you’ve ever watched a wildlife programme with David Attenborough, you’ll have likely heard sounds recorded by Chris and his equipment.  But that’s just his speciality…  He makes programmes for radio, records sounds for video games, for film, for all kinds of audio projects.  Chris Watson doesn’t see himself working in one job, and Mike encourages sound designers and recordists to do the same.

As a long-time Nintendo die-hard, it’s the perfect cross-section of my interests; sound, and video-games.  It’s an industry I’ve long dreamed of being part of.  I’d lie awake at night constructing new Legend of Zelda music in my head, wishing I could get it all written on paper.  Mike lays it out in Layman’s terms.  “When you’re playing a game, you’re walking though hundreds of individual boxes.  Or, Triggers.”  I instantly think of the Wind Waker.  You know, when you’re slashing up Mobilns with your sword, and it does that little trill when you hit one.  …?  Okay then, nerd moment over.

So.  What’s so good about the video-game industry?  “All of the other media industries in the UK, combined, aren’t as big as the video game industry,” claims Mike Pinchin.  Here’s one to make Geordies happy:  “Outside London, Newcastle is the biggest centre in the UK for game design and development.”

If you haven’t heard our earlier podcast with Eutechnyx, a Gateshead based video-game company that specialise in racing games, you should check out Episode 12.  Amazing company, with a great internship process, and a really solid emphasis on keeping its staff happy. 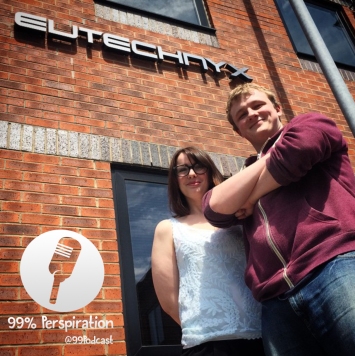 But video-games have changed a lot since his home-made Doctor Who spin-off.  To make video-games, you used to have to start from the ground-work, the awful, fiddly, programming bits.  The way Mike put it was; “Imagine if an author had to make their own version of Microsoft Word.”  That’s what game designers used to have to do.  “And it wasn’t something an individual could do, it was something a team of people have to do.”  But the landscape has changed. 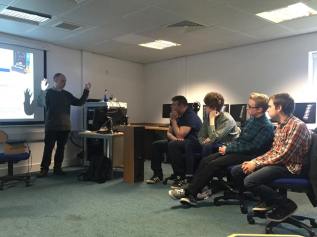 We live in the era of the “Game Engines”.  The likes of Unity and Unreal have released their own programming software, with the basic programming – the gravity, the physics, the rules – all done, and accessible, and ready for you to manipulate into your own game world.  These companies have taken an engine, and are licensing it out…  For free.

What’s the catch?  Well, for instance, with Unity the deal is this:  If you earn £100,000 every year, you pay 5%.  “Can you give anyone else that kind of offer?”  That’s no-where else in any other industry, as far as Mike Pinchin knows.

I asked Mike whether this minimised roles for games developers.  “Maybe, but that’s the beauty of it.  Game developers no longer have to worry as much about the mundane of creating physics, starting from scratch.  It’s much easier to put your imagination to work.”  And it affects team-work too.  “Projects don’t need to be as big, or as long, or as difficult.  Pretty much anyone can make a game now; the landscape is open.”

If you wanted to design video-games, it would cost you £60 a year for an Apple ID, to get your work on Apple’s APP Store.  It’s vastly easier to get a game out there than it’s ever been.  “The Apple platform sells to more people,” explains Mike, “The market is full of people with more disposable income.  Generally, more people will buy from Apple apps than download your free software on Android.  The Android phone market is more-so for older people, who don’t want a complicated phone that can do a lot of stuff – they just want to make calls.  Don’t bother making something for Android that costs money.”

There’s one last thing I wanted to touch on, because it’s already quite a long article.  Mike brought in an Oculus headset to show the class.  The new virtual reality console, one of many to begin flooding the market over the next few years, is available for pre-order.  The class utterly loved it.

And here’s the tenuous link.  There are two video-games which will come bundled with every Oculus console.  One of them is called EVE: Valkyrie.

EVE: Valkyrie is an upcoming multiplayer dogfighting shooter, made by a video-game company called CCP Games, which is based in Newcastle, UK.  And it features the voice of a young voice-over artist called Peff Soulsby.

On the next episode of the 99% Perspiration Podcast, you can hear from Peff about how she got involved in voice acting, and what it’s like knowing her voice will be heard by tens of thousands of people around the world.