Author Alan Parkinson on why it pays off to put in work before getting to work on your novel.

Regular listeners to the 99% Perspiration Podcast may remember Alan Parkinson from episode 16 of season 1.  For some reason, the self-published novel writer (who’s working on fine-editing his third release Counterbalance) wants to offset his karma – we won’t ask why, but we will happily share his advice for emerging writers hoping to turn over a new leaf like Alan.

I approached the writing of Leg It in the same way a drunk approaches a kebab shop. I ended up with the equivalent of a Bolognese Pizza, a Doner Kebab with chilli sauce and a carton of cheesy chips. Far more than I needed, some that inevitably ended up on the floor, some that survived and was reheated the next day but a large chunk that went straight in the bin.

I had no plan, I had no idea who the characters were going to be or where they were going to go and I just wrote a series of random chapters that I thought were funny or interesting and the plot took shape as I wrote. This obviously made the editing process a lot more difficult but as a way of getting words down on the page, it worked. Leg It is a very popular book and I daresay this approach is partly responsible.

Would I use this approach again? Probably not but I don’t regret doing it. It gives a great amount of freedom to the writer and allows you to be very creative.

With Idle Threats I had a bit of a head start as I already knew some of the characters. Bumper, one of the main protagonists had appeared in Leg It so I already knew his personality. I had a rough idea of where I wanted the story to go so largely wrote it from beginning to end rather than random chapters that were later cobbled together.

Part of the way through the process I created a timeline spreadsheet showing where each chapter fitted it in with dates and times so I could see whether it was realistic. It threw up a lot of issues but it was a great way to visualise what was happening and I knew where my gaps were. 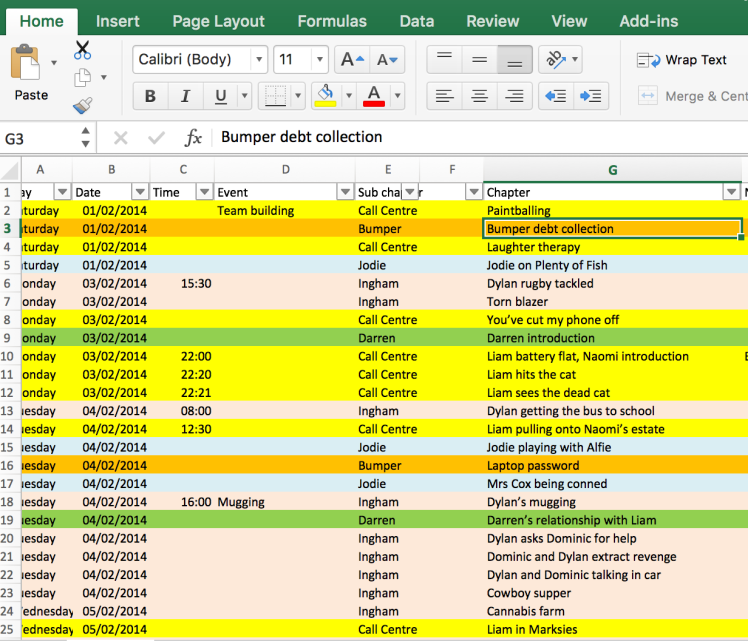 I also started creating outlines for all the main characters, just simple stuff like who they were related to, were they in Leg It etc. These two questions created my biggest challenge when writing Idle Threats. I’ll explain it in a later blog but suffice to say, when writing a sequel, continuity is key.

Idle Threats was a half and half approach. I had a rough outline of the plot, I knew some of the characters and how they would behave and I pretty much knew my beginning, middle and end but that didn’t stop me going off on a tangent every now and then. Some of my best writing came from writing myself out of corners and arguably one of the best characters, Frank the security guard, was never meant to be anything more than the person answering the door at the beginning of the siege. Whilst it took me a few years, it was enjoyable to write and I think the writing and plot is tighter than Leg It.

By the time I started on Counterbalance, I’d been a member of Holmeside Writers for a few months and had been introduced to a number of different methods, writing styles etc. It’s fair to say that two of them became game changers in the way I plotted and planned my writing.

The first was the Snowflake Method. I won’t claim to have used it exactly as per the text book but I took its general theme and adapted it for my own purposes.

I started off by writing one sentence that outlined the whole plot. Far more difficult than you might think but time spent doing that saves a great deal of time in the long run. In theory, this one sentence becomes your ‘elevator pitch’. I’ll admit that I’ve tweaked it since I finished the book but it’s close enough.

From that one sentence, I then created a five sentence paragraph that fleshed out the story. From that paragraph, I took each sentence and made them into a paragraph and so on and so on until I had my plot outline. In theory once again, this should form your synopsis. In reality it was a bit ‘dry’ and was very much a a series of plot events but it made writing a synopsis a whole lot easier.

As with the creator of the Snowflake Method, my background is in Software Development and I understand the importance of capturing ‘bugs’ as early in the process as possible. It’s far easier and cheaper to amend one sentence in a specification than it is to rewrite hundreds of lines of code. And so it is with writing a novel. If you have your whole book plotted out, you can spot the gaps, spot where the plot isn’t strong enough and amend them relatively easily.

Towards the end of writing Idle Threats I was introduced to a writing tool that saw a seismic shift in my productivity, my planning and I would argue, the quality of my writing. Scrivener is designed especially for writers and it is almost perfect for my needs.

As someone who has always used Microsoft Word, it took a little getting used to but it is worth it. It is easy to get evangelical about such things but I’ve seen fellow writers, almost reluctantly give it a go and eventually it clicks and they wonder why they haven’t always used it.

I’ll cover Scrivener more in later blogs but it fits in perfectly with the Snowflake Method. I had my plot outline for Counterbalance and Scrivener came with preloaded Character and Location Templates that I adapted slightly. With its simplistic outlining structure I had everything I needed to get the book written.

One small feature, almost a gimmick, contributed more than anything else to me getting the book finished and that was the Project Targets tool. Just put in how many words you intend to write and by when and it will work out your daily target. It even allows you to factor in days when you wouldn’t be writing. It is addictive. If you’ve ever played a video game and chased a high score or craved a personal best in your chosen sport, this is exactly the same. When it moves from red, to amber to green it is so satisfying. 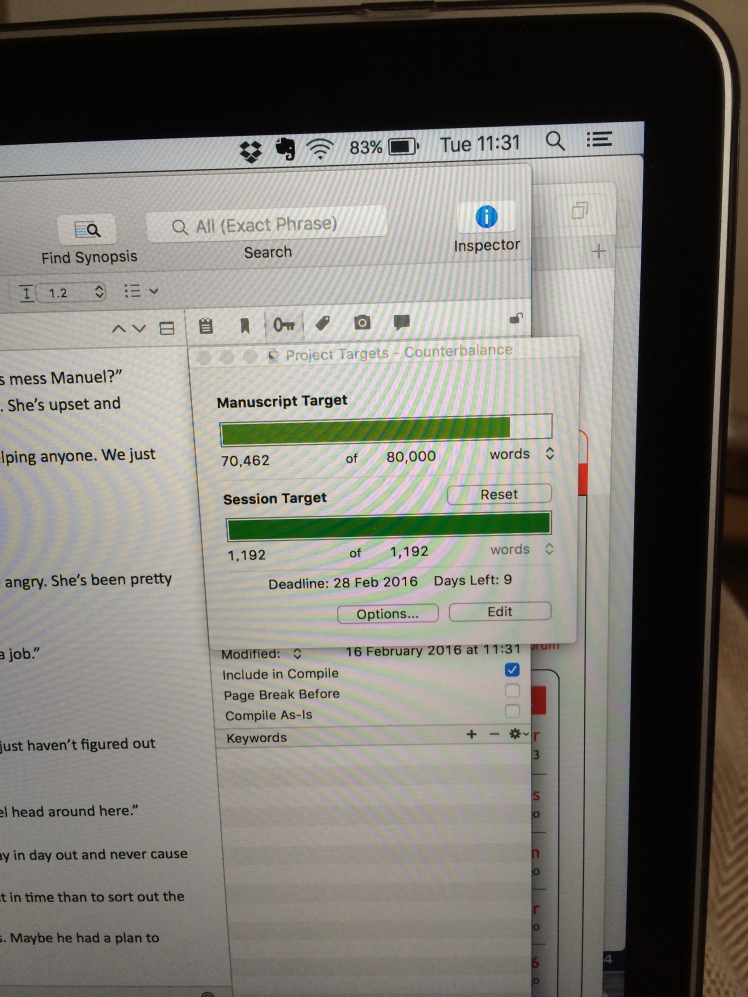 I firmly believe that the combination of the Snowflake Method and Scrivener have taken my writing to a new level. I got my word count a lot quicker (80,000 words in less than 6 months), there were a lot less plot gaps or redundant chapters and if my small band of reviewers are anything to go by, it is the best book I have written yet.

Of course there will be other factors that have contributed. I have learnt from previous mistakes and I am now part of a writing group that will challenge my writing and push me to new heights but my new approach has contributed significantly to my improvement.

“If you’d like to know more, my books Leg It and Idle Threats are available in paperback and Kindle on Amazon and also available on iBooks.

A huge thank-you to Alan for sharing his advice with us.  If you’d like to promote your creative work on the 99% Perspiration blog (or podcast), and can funnel your ideas into content that can be useful for other creatives, get in touch.