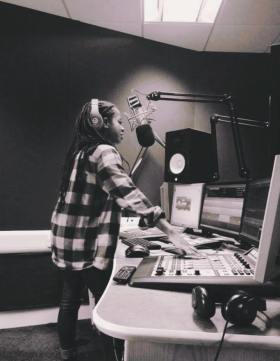 I was 14 when I told my parents I didn’t want to do the family route and study science.  I finally admitted them I wanted to write and it freaked them a bit, because they didn’t know how to get me where I wanted to be, whereas in pharmacy/nursing they know people.

You can consider me the black sheep in the family if you will. Myself and my cousin both take media courses – herself journalism and me studying Broadcast Media Production.

I won’t lie, I was scared breaking out in the media industry.  Taking an easy route into a job wasn’t what I wanted to do and I wanted a challenge.  Since joining Spark Sunderland in 2013, I’ve clocked up a whole calendar of hours (I’ve stopped counting since 150) of radio, and working behind the scenes.  I love doing it.  I love choosing the songs for playlist for my Urban Show on a Monday, choosing what content I should put in my daytime show, being in control of all the specialist programming, I just love it.

But the one thing that bothers me?  I’m one of the seven ethnic minority in the station. Media is not solely focused on BAME [Black and Ethnic Minority], and many just assume to put us in the Urban setting.

So, when given the chance to go down to London to attend a masterclass held by BBC Radio 1 and 1Xtra, I jumped at the chance.  It was a masterclass hosted by creative access, a programme committed to providing the best advice, experience and internship for BAME industry beginners.

The first day in London, I panicked.  Well, of course I did, I was in King’s Cross and was about to burst into tears because I didn’t have enough money to catch the tube home.  Oh how stupid I was, thinking that I could be so comfortable down in London on my own.

Eventually, I got to my aunt’s house.  And my cousin was so excited for this masterclass that she wasn’t even going to.  “You’re going to make it, Steph, believe me.” I tried. I really did.

On the day, I wanted to look really good.  I mean, I’m going to my future workplace, I wanted to stand out.  Before making down in London I went to Newcastle and bought a whole new outfit, that screamed “I KNOW WHAT I WANT AND I’M GOING TO GET IT.”

I mastered the tube with swagger, walked triumphantly down Oxford Street, and once I made it to Broadcasting House…

I took a couple steps back to McDonald’s to eat two meals.  Stressfully.

I give myself a pep talk, and immediately went through the doors.

Instantly I was directed to a line for the masterclass, and noticed everyone was wearing trainers and jeans.  I was wearing low Mary Janes and a skirt.  I panicked again.

Being waited momentarily in the café (with the BBC shop just casually there) it hit me. I was miles away from home in a place I don’t know, wearing a skirt I was slowly starting to despise and heels that were biting into my ankles.  I couldn’t fit in.

Someone brushed past me and asked “is this for the masterclass?” And dumbly, I nodded.

One thought on “Meet Stephanie Chungu.”