Today’s post comes from the genius audio producer that is Tim Johns, who is currently Reporter/Producer for The Jeremy Vine Show on BBC Radio 2.

I did a talk on this subject at this year’s Student Radio Conference in Cardiff.

Yes, some of it is blindingly obvious, but I thought it needed saying because I see people come in for radio placements/internships/shadowing at Radio 2 a lot.  And so often, people get the little things wrong. 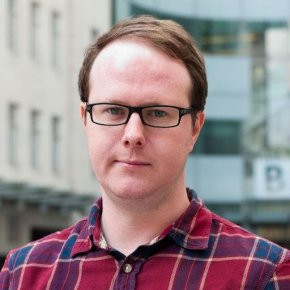 If you’re asked to pick up the phone and book a guest, take a deep breath and go for it. You need to be charming and persuasive. It can be slightly daunting making this first phone call in an open-plan office but if you come across badly and the guest says “no” that’s not great.

Take this one with you for life. It goes a long way. No-one in radio likes the person with the massive ego. Or the one who’s unfriendly or bossy. Just…be nice.

Sitting in on a show? Turn your phone off

Well, ok, you can keep it on but put it in your pocket and leave it there. Sure – take a photo. Send a tweet. If the programme needs some urgent fact-finding done get on the Google. But as much as you can, put it away and give your absolute undivided attention to the programme you’re there to watch. I asked Jeremy Vine for a hard-line view on this:

If you’ve been sitting around in the office for a while wondering what to do, ask people if you can help. If they’re clearly right up against it, maybe wait a while. But be pro-active. And if they say “not just now, thanks”, then don’t worry about it. At least you asked.

Look – I thought about leaving this one out. It’s such a whopping cliché. BUT British broadcasting is fuelled by tea and coffee. It is VITAL. If it makes you feel better, I may be a Producer and reporter for Radio 2 but during our programme every day it is my job to make the tea! I somewhat enjoy it.

You’re never too senior to make the tea, people are always grateful to be asked, and you can’t go wrong by asking. So do it.

Every bit of this sentence is important. Ask good questions. It’s the easiest way to show you’re keen, engaged and interested. BUT – never ask a question for the sake of it. You need to be genuinely interested and inquisitive. If you are, your question will probably be good. You also need to ask them at the right time. Some people are unable to sense when everyone around them is chaotically busy and continue asking questions regardless. Hold fire until there’s a good moment.

Know the basics about the station you’re visiting

Basic basics, right? But people genuinely get this wrong. Here’s some advice from BBC 5Live:

This isn’t like work experience you did at school when you were 16: ‘just to have a look’. If you want to work in a competitive industry then this is now about having a look but also making a great impression. Treat any placement like a mini job interview. It’s often the thing that leads to an actualjob interview. And you’d never turn up at a 5Live job interview not knowing who the station presenters were. (Right? Please – never do that!).

Suppose you shadow on a programme you probably never want to work on. Perhaps you got an offer to come and visit; maybe you just love the industry and want to have a look at different radio stations. You still need to take it seriously. Do your research. Know about the station.

Why? Because the radio industry is surprisingly small. The assistant producer who thinks you look a bit bored when you shadow at Radio 3 could be the person who turns you down for your dream job five years later at Kerrang.

I don’t mean be well behaved. I mean be good at what you do. Be good at making and understanding radio – following advice like the above isn’t enough. ‘Asking good questions’ won’t get you a job on its own. Putting your best link at the start of your demo won’t get you a presenting gig if your best link is a bit rubbish. Always keep practicing and improving. Find out what you’re good at. Follow that.

Good luck! And finally, listen to Jacob from Radio 1 because he’s very wise and would like to apologise on behalf of us all for why part of your work experience might be a teeny bit rubbish:

Since posting this I’ve had some delightful responses from other radio-folk about how people have messed up their work experience. Here are just a few real-life stories:

“One person from the local university FELL ASLEEP in the studio!”

“I remember a guy who refused to make tea when the producer asked. He said it was ‘beneath him’. I explained that if he wanted to get on – it’s part of the deal! The producer was livid. In contrast, someone else on placement made tea every ten minutes. I preferred them.”

“My favourite was sitting next to someone on work experience who was on the phone to a guest. I heard him say: “the frequency?”. Then he turned to me and said “what’s a frequency?”.”

“Sometimes they don’t turn up on day two of work experience, and say ‘I don’t think this is really stretching me’.”

“Answering calls on the phone-in with the wrong station name was a personal highlight of mine for one work-experience person recently.”

“I like the ones that call me for work experience. I say “email me”, they then ask for my name, email and the name of my company! Come on people!! We now only go for people who present ideas when they approach us.”

“Someone on work experience once missed me off a tea round. Never forgiven him.”

“As a press officer I set up an interview for a reporter who was on radio work experience. Her questions were ok but she didn’t ask for the interviewee’s name and title until two hours later.”

“I had someone ‘keen’ to shadow a show. I know it was a breakfast show but she came late, left early and never said thank you.”

Here’s a fantastic bit of advice for anyone on radio work experience:
“Have a headphone splitter in your pocket – watching people edit is v useful; hearing it is even better!”

And here are some words from my former boss:
“There was the girl who didn’t know that the water had to be boiling to make tea…and the one whose mum came with her…and the lad who spent most of his time picking bogies out of his nose and eating them. We have some lovely ones though! And we’ve employed a lot of them. You are right to point out that it IS an extended job interview and those who prepare even a tiny bit will benefit. I’m amazed that some people don’t bother.”

You can mess it up…but go on to great things…

Many people survive a disaster and live to tell the tale! Radio supremo boss-man Matt Deegan says this:
“As a work experience at 2CR when I was aged 14 I recorded over Classic Gold’s pre-recorded news with me practicing. It went out for a few hours. Eeek. When asked if I did it, I denied it. I wasn’t sure what I was denying at that point.”

Here’s some more from the very successful Steve Martin:
“During my BBC traineeship I played out entirely the wrong Schoenberg piece on Radio 3. Nobody noticed.”

There’s this too:
“I know someone who played a Christmas carol service out with wrong side of the tape hitting the head.”

And this:
“When I did a placement year at Virgin, I somehow deleted the WHOLE website… Still got hired after uni. :D.
The colour of my face that day is one unknown to the usual human skin palette. I WAS MORTIFIED.”

You can check out the original post, & tons of awesome advice geared to emerging radio talent, by heading to Tim Johns’ website.