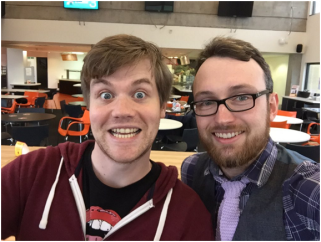 Ryan’s the one looking goofy on the left, I’m the one with less than cool fashion sense on the right. Who even wears knitted ties?

Juice Festival blog’s Ryan Watson caught up with me over lunch to chat all things creative, and why I make 99% Perspiration.  (You can read part 1 of the interview here, where we talked about questions, interview skills and preparation.)

We chatted about networking skills, building up confidence, creative opportunities, and about the inspiration behind making 99% Perspiration.

Could you tell me about some of the challenges in building up the audience for 99% Perspiration? 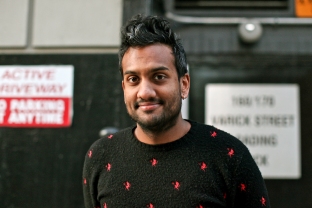 Click here to listen to Sean Rameswaram, producer of Sideshow on WNYC & Studio 360, on 99% Perspiration

Podcasts do take a lot of work, a lot of time to build up – you’ve just got to keep going at it really.  I haven’t increased numbers as much as I’d originally hoped for, but I’ve increased numbers a fair bit since I began.  We’re into the thousands now, it’s taken a long time.

Yeah, I was hoping to have conquered the world by now.  (Jay laughs.)

END_OF_DOCUMENT_TOKEN_TO_BE_REPLACED

The latest episode features two big names in the world of podcasting.

Eleanor McDowall is the Senior Producer at Falling Tree Productions, and series producer of Short Cuts on BBC Radio 4. If you haven’t heard it, I would thoroughly recommend you take a listen; presented by comedienne Josie Long, the radio programme/podcast showcases the new short features made by audio producers around the world. And if you want to get your work onto the radio, it’s a great place to send your stuff.

Chris Marr is the founder or Learning Everyday Ltd  & creator of the Marketing Academy Podcast. His philosophy is that content marketing is an integral aspect to any business, creative or otherwise, and aims to help as many people as possible benefit from the benefits of content marketing.